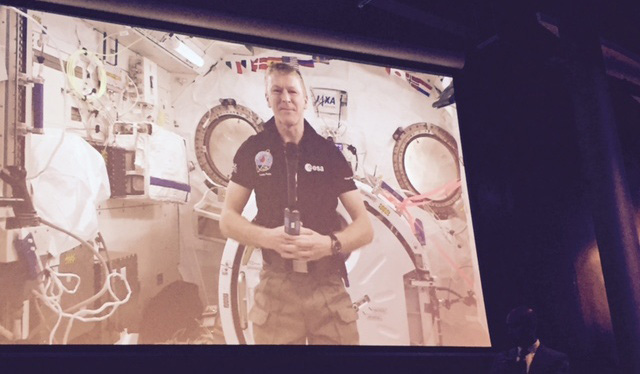 On Tuesday this week, six Year 7 pupils travelled with Mr Singadia and Miss Molyneux to the National Space Centre in Leicester to take part in a live in-flight call with Tim Peake, the ESA astronaut currently on the International Space Station! Sam, Rowan, Zena, Max, Tanaka and Matthew are GCSE Astronomy students at Sharples and were absolutely ecstatic to be chosen to attend the event.
On arrival the team were treated to a lecture by Anu Ojha who is the Vice President of the Federation Aeronautique Internationale. This was followed by a live link up to the European Astronaut Centre where Frank de Winne, who was the first commander of the ISS and has spent 200 days in space, answered the students’ questions. Rowan posed an impressive question: “Do you think that the ISS will be developed further in the future?”
The main event followed and it did not disappoint! Tim Peake appeared live on the big screen and greeted us with the words “Hello Leicester, can you hear me?!” He talked about his time in space and some of the experiments that he has been doing, including some special experiments for schools to demonstrate GCSE and A Level concepts.
The day ended with an official photocall for the Sharples team with Anu in front of the Space Centre. We would like to thank the National Space Academy for their kind invitation to this event. It really was a once in a lifetime experience for our students!