By Drew Speight24 June 2021No Comments 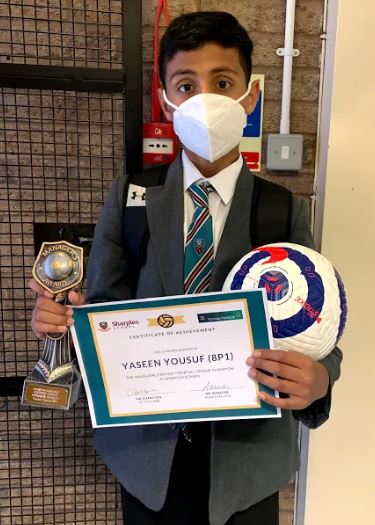 A final congratulations to the Fantasy Football Champion for 2020-21, Yaseen Yousuf in 8P1. Yaseen was presented with his prizes for winning the league. These prizes included a certificate signed by Ms Webster & Mr Charlton, a ‘Managers Award’ trophy with Yaseen’s name engraved on it as well as a Premier League matchball.

The Sharples Fantasy Football league will be returning in September with the final touches being added and finalised now. Details of the new league will be shared via email both before and after the summer holidays, there will also be posters shared with students via email as well as being displayed around school. The fantasy football league will come back bigger and better next year with the hope of introducing a lunch time club to allow students to make their changes if they are unable to do so at home!

Congratulations once again to Yaseen, who will look to retain his title next season but will most certainly face stiff competition from the rest of the league.