By sharples-admin4 October 2019No Comments 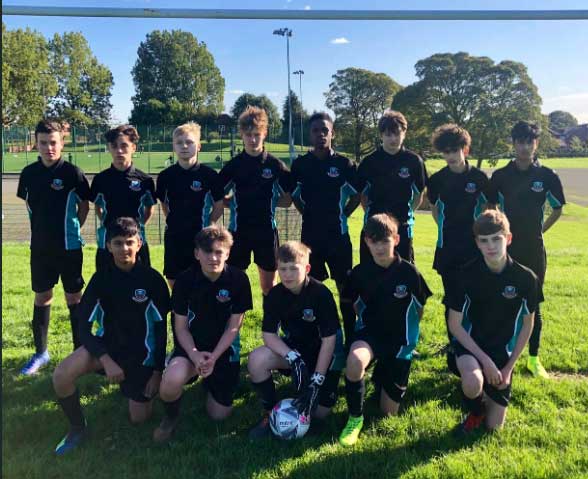 It’s been an action packed week in PE with a number of practices and fixtures taking place.

On Monday, Sharples hosted a primary football tournament. Sharples Primary, The Valley and The Oaks all took part in a close and competitive three-way competition with The Oaks coming out on top.

Year 10 travelled to Smithills on Tuesday to compete in the Bolton Cup. It was always going to be a battle in difficult playing conditions but the team were up to the task. Sharples looked to play on the break, utilising the skills of Blazej and pace of Faraz and Daniel up front. The game plan soon started to work as Cole began to pick up the ball and find the front men over the top. It was a convincing 6-3 win in the end with goals from Cole, Blazej, a 30 yard screamer from Jameel and finally, Daniel scored a hat trick earning him man of the match.

Year 7 had their first game of the year on Tuesday hosting St Catherine’s. The squad was full of enthusiasm and energy in the early stages despite conceding 2 early goals against the run of play. After regaining their composure, the team managed to score their first goal of the year courtesy of a great finish from Ben. On the stroke of half time, after a great free kick from Harvey, Ben once again used his initiative to follow the ball in and score his second of the afternoon. With the team looking positive heading into the second half, Sharples took the lead from a penalty thanks to Harvey. Although it was not enough to win the match, all students played in high spirits and performed as a team to a high standard. St. Catherine’s were narrow winners with the full time result ending Sharples – 3, St Catherine’s – 4. Man of the match was goalkeeper Oscar who made several important saves throughout the game. Well done to all members of the squad who will continue to improve as the season progresses.

Year 9 were full of confidence in their first Bolton Cup match of the year, after a great performance last week winning 7-0 against Kearsley Academy. The game took a similar start as, after some crisp team passing, Sharples broke the deadlock with a neat finish from Phil. Year 9 showed no signs of letting up with continued dominance of possession throughout the first half leading to another goal from Mohammed. In the second half the lads continued to show a ruthless approach scoring another early goal from some great team passing – again – Phil took the finish. After some tense moments and obvious nerves settling in, the score was 3-2 until a third goal from Phil seemed to weather the storm. Another brilliant goal from Mohammed and a screamer from Liam from inside his own half ensured Year 9 progressed to the quarter finals. Final score: Sharples – 6, Mount St Joseph’s – 2.

Year 11 had a rare fixture in the Bolton Cup and entertained Mount St Joseph’s at Sharples. The team have had numerous training sessions against the staff team on a Friday to help them prepare. The team were an absolute credit to the school; showing great resilience and team work to come from behind twice and progress through to the quarter finals of the Cup with a 3-2 victory. The squad looked overjoyed with the result, although their joy will probably be short lived when they are brought back down to earth on Friday by the Staff football team.

Year 8 travelled to St Catherine’s hoping to bounce back from their recent Cup exit last week. The team showed great character and it was clear that they’d managed to put last week’s set back behind them. However, it was a tale of missed chances as Sharples struggled to capitalise on fantastic goal scoring opportunities and were caught on the break when searching for the next goal. In the end, the game finished 5-3 to the opposition; Abbas scored 2 sublime free kicks and Ashton followed in from Noah’s shot against the crossbar. I think it’s fair to say that Sharples deserved all 3 points but have learned a harsh lesson in football that will only help them in the future.

Unfortunately, the netball team didn’t have the opportunity to build on their fantastic start due to the opposition pulling out of the fixture at the last minute. However, well done to the girls for attending both practices in preparation for their game against Smithills next week.