By sharples-admin19 October 2018No Comments 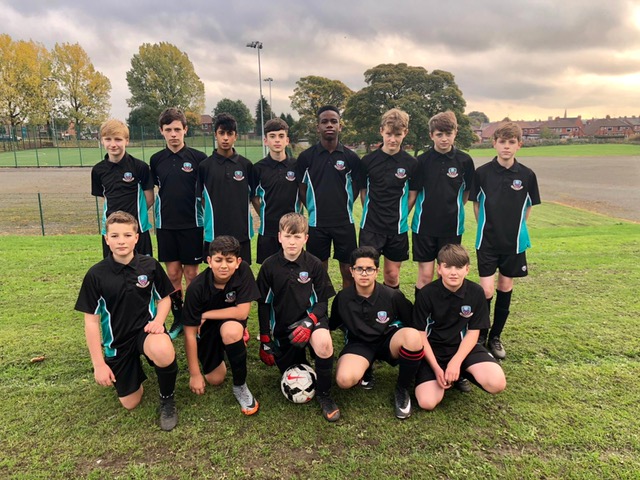 It has been a busy final week to finish off what has been an eventful and fantastic half term for students in PE at Sharples. Years 7-10 football teams were all in action along with the Year 10 netball team and the annual Bolton Cross Country Championship.

Year 7 hosted St James in the Bolton Cup. It was a difficult draw but Sharples were immense – in the first half – and were unlucky to go one goal down at half time. Sharples pushed for an equaliser but, despite going close numerous times Noah, Aston and Mohammed couldn’t find that all important goal. St James were impressive on the counter and, despite the best efforts of goal keeper (Ibrahim Khan) he couldn’t prevent St James from adding to the scoreline.  Meaning they will go through to the next round. It has been an excellent start to the season for Year 7 and great to see so many students attending training and playing for the team.

Year 8 were also in action in the cup (on the same night) against Rivington & Blackrod. The team were feeling confident after some impressive recent results and this was evident in their performance. Sharples scored 3 impressive goals through Selim, who scored 2, and Muhammad Patel. Jacob Bolton was immense at the back again but couldn’t prevent the opposition from going through to the next round. The score was 3-3 after full time and went into extra time but, unfortunately, it wasn’t meant to be.

Year 9 and 10 entertained Kearsley on Thursday hoping to finish for the autumn break with a win. However, it wasn’t to be as both teams struggled to compete against 2 very physical and strong opposing teams. Faraz Ali scored a consolation goal for Year 9 whilst his brother, Ali, impressed in defence. Year 10 always looked dangerous on the attack and the impressive Mohammed Hasan scored an excellent goal which Sam Hall added to after heading home from a corner. However, Sharples struggled to contain the opposing team despite the best efforts of Ashraf Munshi and Sam Fullarton in midfield.

The Year 10 girls had a depleted squad but fortunately the school have some dedicated performers that were willing to step in at the last minute and play for the year above. The team didn’t have enough to make it out the group stages but will be looking to get back to winning ways in the league against Essa in the first week back.

Wednesday was the annual Bolton Cross Country Championship. All schools from Bolton selected their top performers to represent the school and compete against the fittest in Bolton. It was a fantastic event and all competitors should be proud of their performance and resilience shown on the day. A special mention to Abdifatah Mohammed who finished in the top 20. However, the performance of the day and – quite possibly –  the year was by Year 7 pupil Harvey Kenny, who continues to excel in his short time at Sharples. Harvey won his event which is truly a magnificent achievement and he will now go on to represent the town in the Greater Manchester Championships.

A special mention to all students this week who haven’t represented the school in a sport but have been to the fitness suite, football and netball practice and attended swimming after school on a Monday and Wednesday. It’s great to see so many pupils being conscientious about their health and well being whilst having fun with their peers.