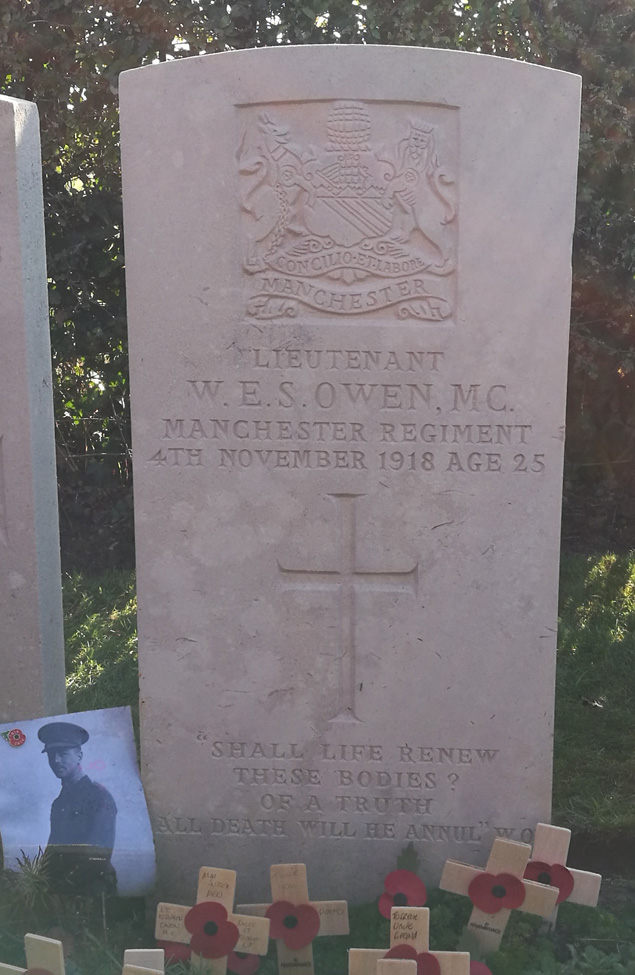 Before dawn on Thursday 1st November, Mr Hesford and two Year 10 students set out on a journey that would take them miles from home and bring one of the most powerful chapters in history to life. They visited sites in Belgium and France linked to major battles of the First World War. If that wasn’t enough of an incredible opportunity, this tour coincided with the 100th anniversary of the death of Britain’s most famous war poet, Wilfred Owen, and offered students the chance to visit the town where Owen fought and died 100 years ago.

As part of the centenary commemorations of the First World War, free battlefields tours have been offered to students from every secondary school in the country. The Institute of Education, alongside Equity Tours, put together an intensive programme of events that enabled two of Sharples’ Year 10 boys, Leighton Brown and AJ Rookes, to visit a number of important sites linked to the conflict that ended a century ago.

After a challenging first day of travel, where the M25 confirmed its reputation as Britain’s most agonising stretch of road, the two students arrived with their teacher at the hostel in Mesen (Messines) late on Thursday night. The first full day of touring, Friday, saw them exploring sites linked to the Third Battle of Ypres in 1917. Messines Ridge, famously blown up by Allied soldiers using specially-constructed mines, was close to the accommodation for the first two nights and, as our guide explained the day after we checked out, still has undiscovered mines packed with explosives!

Friday also involved visits to cemeteries, both British and German, and the place where soldiers were shot at dawn for a number of military offences. Perhaps the most interesting and hard-hitting aspect of the day was when the students were given the name of a soldier from Astley Bridge, who lived less than a mile away from where Sharples School now stands, who died during a battle in 1916. This helped the boys to see how fighting was undertaken by young men from areas like their own and how the First World War would have brought heartache to people hundreds of miles away from the Front Line.

The day ended with the very moving service at the world-famous Menin Gate. The gate, located in the town of Ypres, is a memorial to over 50,000 soldiers from Britain and the Commonwealth nations who died in the fighting around Ypres but have no known grave. The Last Post, a staple of remembrance events, was played to bring about the observance of one minute of silence. Despite the event being hosted every day since 1927 (except for the time when Belgium was occupied in the Second World War), a huge crowd gathered to pay their respects.

Saturday brought a change of country as the tour group moved towards France and sites associated with the First World War’s bloodiest of battles: The Somme. The students visited more cemeteries and memorials and shifted their focus to war poets such as Robert Graves, Noel Hodgson and Siegfried Sassoon. They visited battlefields and saw how the destruction that man inflicted on the land has still not disappeared over a century later. They stood on the field where hundreds of men from Manchester and the surrounding area were cut down in one mission. Shortly after, they stood at the top of the hill and viewed the field from the same position as the enemy machine guns laid waste to so many young lives. This was one of the most haunting experiences of this tour and hammered home the destructive power of conflict.

Saturday ended with a visit to Thiepval Memorial; a grand structure that commemorates over 70,000 soldiers from Britain and South Africa who died in the conflict and have no known grave. Two sites, Thiepval and Menin Gate, are the only place over 120,000 young men are recognised. They have no graves as their bodies were never identified. The scale of the Thiepval Memorial, as well as the beauty of its surroundings, is perhaps the only positive thing to be said about such a tragic and poignant site.

The final day, and the prospect of travelling back to Bolton before they went to bed again, was a day of mixed emotions for the two students. The emotional rollercoaster of this tour was coming to an end but there was the chance to take part in a once-in-a-lifetime experience before they left France. 4th November 1918 saw the death of Wilfred Owen in a small village called Ors. The tour visited the cellar where Owen, along with 12 other officers, spent the final days of his life. This was followed by a visit to the canal-side location where Owen tragically fell 100 years to the day that the students stood there. Glen, the expert tour guide, painted a vivid picture of the final moments of Owen’s last moments with the help of a serving member of the Armed Forces. This was a particular highlight for the boys.

Those two experiences would have been enough for a great experience but this trip was something much more. The tour then made its way to a church service, hosted by the village of Ors, where people paid tribute to Owen and the other men who died in fighting just a week before the end of the First World War. The minister leading the service invited a representative of Manchester’s young people to say a few words. After some confused glances between the staff and students of 14 schools, as well as the tour leaders, it was clear nobody knew this was going to happen! Thankfully, Leighton Brown and Mr Hesford stepped up and spoke to the congregation. Mr Hesford, in a speech off the top of his head, thanked the people of Ors for their tributes to Owen and other Manchester soldiers. He then talked about the importance of Anglo-French unity over the next 100 years to ensure the brave men buried in some corner of a foreign field are never forgotten. After this moving service, the group were taken to Owen’s final resting place in order to pay their tributes. With that, the trip ended and the slow process of returning home started.

From this trip, a legacy project needs to be established. The students, along with Mr Hesford, came up with an ambitious project: The Next 100 Years. This project is committing the students, staff, governors and Sharples community to participating in remembrance activities regularly between now and the 200th anniversary of the end of the First World War in 2118. A record will be kept and a number of exciting events are already being prepared. This ensures that the humbling memories and powerful stories experienced by two students and their teacher will be kept alive for generations to come.